Tasks:
Make one of the title characters of the series look like a child.
With the help of photography, to convey through illustration not only external similarity, but also character.

Performance
To give the character a portrait resemblance to a living person, the customer handed me a photograph, an illustration was made on its basis.
Several pencil sketches were created and submitted to the client for approval.
In order not to get out of the style of the cartoon, careful drawing of details was not done. Portrait similarity is outlined. Despite this, it is difficult to make a mistake in who served as the prototype of the character.
After approving the sketch and character, he was introduced into the cartoon, adding Rick and Morty. As you know, they constantly travel from galaxy to galaxy, therefore, in order for the picture to come to life, a spatial transition was added in the form of a portal from which the heroes exit.
Since this illustration was drawn for children, bright juicy colors and a fun design were chosen for it. 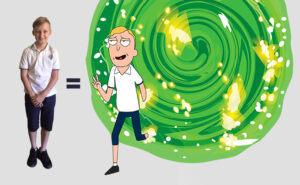 Result
Bright and colorful picture in which the child recognizes himself. This will not only be flattering for him, but will also make it possible, looking at the illustration, to dream about future travels.
Vector illustration is very convenient in that you can change its size without harm to quality. It can be used as a panel in the interior of 3×3 meters or as a picture on a case for a mobile phone.